When Ercan Karakoyun goes to a restaurant in Kreuzberg or Neukölln, Berlin’s boroughs with a large migrant population, he never sits with his back to the door. When he leaves, he looks left and right before exiting, to make sure no one is waiting for him. He also stopped visiting Turkish mosques, fearing an attack. This is the new reality of life for critics of the Turkish government, he says, even in the German capital.

Karakoyun heads the Foundation for Dialogue and Education in Germany, the official representative of the Hizmet movement identified with exiled cleric Fethullah Gülen, who was blamed by Turkish President Tayyip Erdogan for instigating July’s attempted coup.

The foundation – which strongly denies Ankara’s allegations – operates in Germany 150 tutoring centers, 30 schools and some 15 inter-faith dialog centers, and is supported by up to 100,000 German-Turks – that have now become a target for Erdogan’s advocates.

“There are death threats, our institutions are destroyed, stones that are thrown at the windows, there’s graffiti,” told Karakoyun to i24news. He too received death threats, including from onetime friends and classmates.

“People now find their names on lists sent via WhatsApp to different people, denouncing them as Hizmet sympathizers and demanding to boycott them. It is very alarming and people are afraid,” he added. Police have launched dozens of investigations but no arrests were made so far, as perpetrators remain anonymous. The German-Turkish community has always been extremely divided, with imported rivalries between Erdogan’s conservative proponents, Hizmet’s religious moderates, Kurds and Kemalists (adherers to Mustafa Kemal Ataturk’s secular reforms). “But we have never faced something like this in Germany,” stressed Karakoyun, “and it shows how long Erdogan’s arm is.”

Tensions between critics of the Turkish president and his supporters grew in recent months also in Belgium and the Netherlands, which are too home to a large Turkish minority, but Germany with its community of three million ethnic Turks (the largest outside Turkey) has become the main hotspot.

The threats made against Hizmet followers can easily constitute a hate crime, asserts the movement’s German chief. “Just because you can spell the name Gülen, you are viewed as a terrorist, which is absurd. The people here have nothing to do with the coup. I don’t even think that the people of Hizmet in Turkey had anything to do with it, not to mention a supermarket owner in Berlin’s Kreuzberg.”

But their persecution following the failed coup is now causing even German residents to try and avoid association with Hizmet, says Karakoyun, thus hindering the movement’s efforts to create dialog and facilitate integration.

“We just want to avoid confrontations. We tell our sympathizers to go to Bosnian or Arab mosques instead of Turkish ones, just to avoid provocations.”

This restrained behavior, he believes, is the main reason why no significant violent incidents were recorded so far, but with media reports that Turkey’s intelligence service is operating in Germany a 6,000-men-strong network of informants, concerns of an escalation only mount. 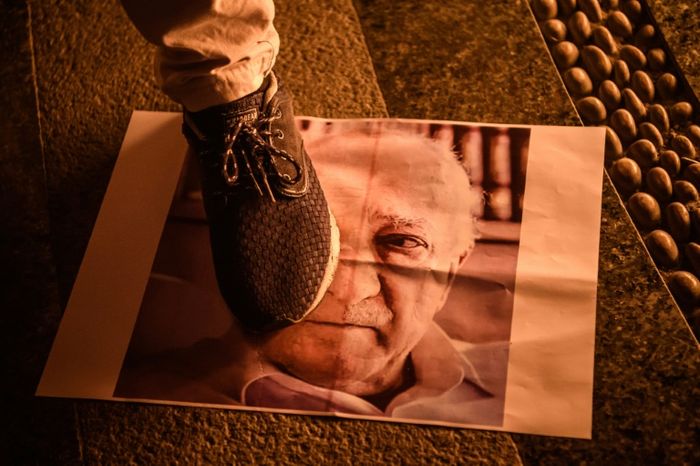 Many Hizmet sympathizers now also seek to obtain a German citizenship, relinquishing their Turkish one, believing this would protect them, both on German soil and if they visit Turkey.

Their targeting is also largely motivated by envy, argues Karakoyun, since while the majority of Turks in Germany are poorly-educated conservatives, Hizmet members represent a well-integrated, well-established new German-Turkish middle class.

But the Turkish conflict’s spillover now endangers all of this – not only by playing into the hands of the far-right, which wonders how can migrants be allowed to “carry out their fights on our streets,” but even by causing German politicians, including Chancellor Angela Merkel, to question whether this reflects a lack of loyalty of German-Turks to their new home.

Karakoyun rejects the allegations: It’s rather a problem of integration than of allegiances, he argues. “They [Erdogan’s supporters] don’t understand what democracy and human rights really means. In a demonstration in Cologne after the coup, 30,000 Turkish people were shouting in favor of the death penalty and in support for a de facto dictator, who forbids all kinds of demonstrations in his country.”

Now Erdogan also tries to instrumentalize Turkish institutions in Germany and have them spread propaganda on his behalf, in the hopes of influencing Germany’s politics through its large Turkish community, added Karakoyun.

The German authorities should therefore take a stronger stand against such intervention, he insisted. “We need more support and clearer statements, because carrying over Turkey’s atmosphere here only damages the integration of Turks and of Islam in Germany.”

Polina Garaev is the i24news correspondent in Germany